Friends, the moment of truth has come, the time for strong emotions has come, it is now time to show that all the work done in the last two years has been worth it. Friends, it’s time for Kickstarter.

On June 15, Scarface 1920 launches its campaign on the crowdfunding platform. And it does so with a very special surprise for all those who have decided to back the game in the first 48 hours: an exclusive miniature. Let me introduce you to The Paperboy.

The Paperboy, as you can imagine, is a reference to that boy of the 20s who went out to sell newspapers in exchange for a few pennies. And it is also one more piece of immersion to dive into the fearsome Chicago of Scarface 1920.

Well, The Paperboy miniature, modelled by Bigchild Creatives and based on an illustration by Antonio Stappaerts, is an exclusive Kickstarter gift for those who back the game in the first 48 hours. This miniature, which as you can see is spectacular, acts as a replacement for the time track marker, which in the normal version is a plastic token. 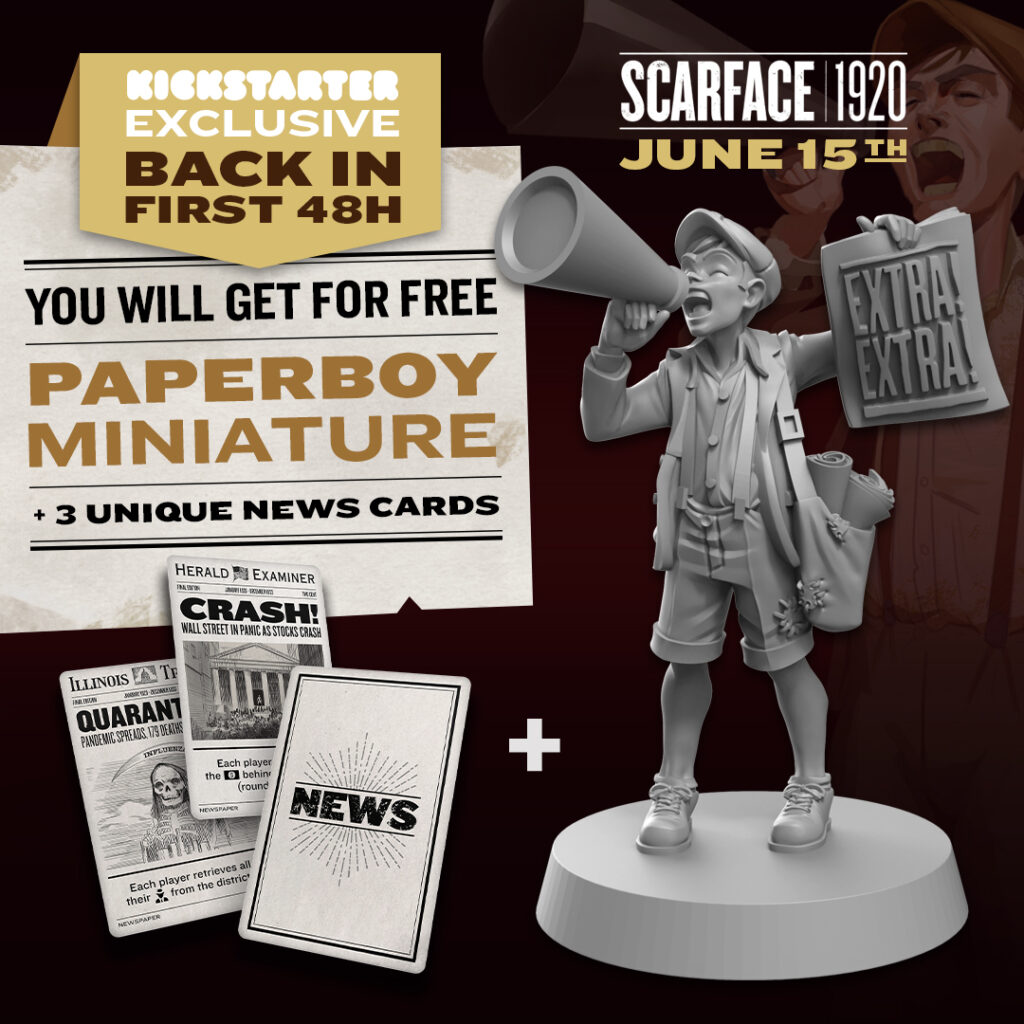 But that’s not all, since the miniature is also packed with three exclusive news cards. The news are events, related to the era of Prohibition (1920-1933), that will affect the development of the game and that can change some of the rules during a round. Those who back the game during the first 48 hours will also win those three events along with the Paperboy. For free!

What are you waiting for? Click on the “Notify on Launch” button on our Kickstarter, have a little patience, back Scarface 1920 during the first 48 hours… and get The Paperboy miniature for free with its three exclusive news!

For the undecided: there will be a second chance

At Redzen Games we are aware that not everyone backs a Kickstarter project during the first 48 hours. Some people need more time to think and take a decision. Well, all of them should know that The Paperboy, together with the three exclusive news, can also be obtained as an Add-on after the first 48 hours of the campaign. Of course, it will not be free, but will have a price of 10 dollars.

Tip: start thinking about it now, so you back the game in the first 48 hours… and you will get it all FOR FREE!